Hotville Chicken is a fast-casual restaurant serving authentic Nashville-Style Hot Chicken prepared by Chef Kim Prince.  The Prince family is recognized and awarded as the first to craft and open a Nashville Hot Chicken Shack in America.  It started back in 1936, where Kim’s great-great uncle Thornton opened a brick-and-mortar restaurant in Nashville, TN.  The story goes:  Thornton was a very handsome gent who had many women in the city smitten by his charm.  Not known for being a faithful spouse, he juggled several mistresses at one time.  As it would turn out, one day an unhappy mistress sought revenge after he was out philandering late.  She prepared his favorite meal, fried chicken and added a concoction of spicy pepper on it, but he loved it.  So, much that he opened the BBQ Hot Chicken Shack.  The restaurant is now named, Prince’s Hot Chicken after the Prince family name and Chef Kim continues the family's legacy in Los Angeles today.

Hotville Chicken started as a popup restaurant in 2016 and formalized as an LLC in 2018.  The traveling popups occurred often on weekends in temporary venues and parking lot festivals.  The popups were popular and garnered much media attention, but left the brand without a permanent home until December 2019.  With the help and partnership of long time restaurateur, Gregory Dulan (Dulan's Soul Food/Aunt Kizzy's Back Porch), the pair have created a popular filling-station in the heart of a socio-economically disadvantaged community.  Hotville Chicken opened a brick-and-mortar on December 17, 2019.  The launch of the restaurant shot out of the bolster like a rocket with no limits toward the sky.  Proudly boasting six-figure sales for the first quarter of 2020, and then the inevitable:  COVID-19 almost shuttered the new business.  Chef Kim Prince was determined to remain open despite the many opposing odds the pandemic created. 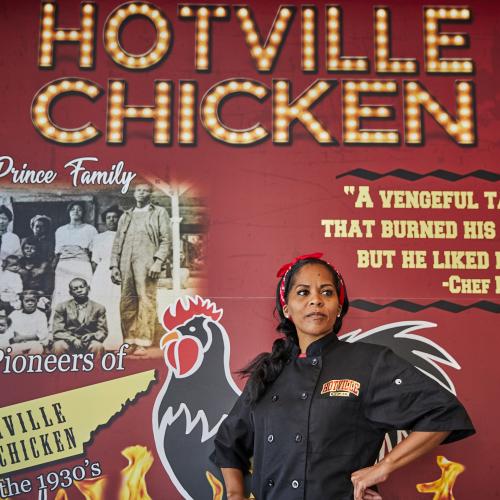